Well, actually already dere as of the time I'm writing this post, but for the sake of chronology and stuff I'll split the remaining content between two posts. So yes, everything is 100% finished, and based. This post will be focused on the remaining boyz and grots, while the next one will have group beauty shots of the entire commission. Trukks, bikes, buggies and gits all together, with bases complete. I also want to include a short video showcase, for which I've already recorded a ton (~90 mins) of footage that I now have to cut down and edit into a short, presentable clip, max 10 minutes long. Once that is done, The post will go up, hopefully by the end of the week. 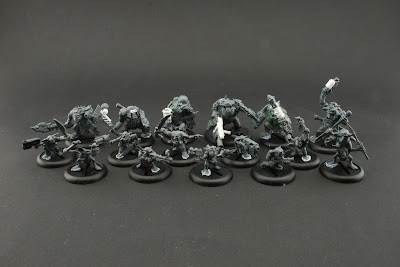 For now though, let's have a look at the remaining minis. There are sixteen in total: one nob I've finished up, two spannerz, three boyz and ten grots.

While the following are more kitbashes than the usual conversions, there's a few of my favorites amongst them nonetheless. 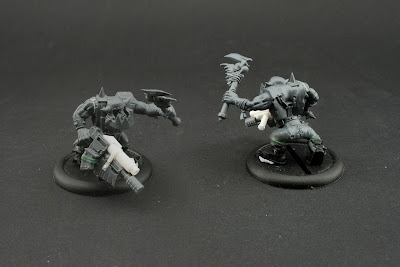 This guy finally got his choppa arm, with the choppa part swapped for a fancier one from the savage orks kit. Also strapped his mags together and glued the head, steel gob and the rest together. 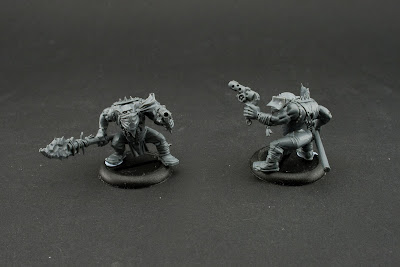 Really happy with this one, even though he's just a kitbash. Legs from some second-hand burna I had laying around, six-shoota stolen from a grot, savage ork spear and a stormboy head. Quite like how the pose came together. 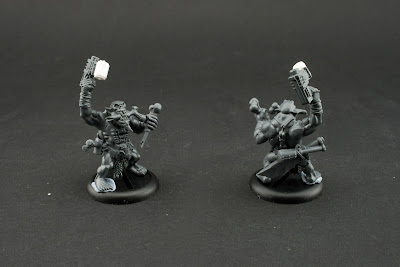 Another savage-based boy. Given him a slugga hand with an extended clip, affinity for bones as snacks and implements of melee-based pain infliction and some spare mayhem makers on his belt from the stormboyz kit. 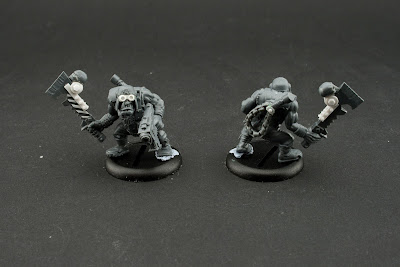 Second of the spanners. Because I forgot to include the vehicle crews in my calculations, I ended up running out of legs, so I based this one on an AoBR ork, of which I have quite a lot. The choppa was modified using another choppa blade, some creative cutting and plasticard to turn it into a massive wrench. His slugga is a cut down shoota from the boyz kit (the only one with a stock), cut off and fitted to the left arm (it comes with a right arm, as most of the shootas do). The front was finished with a barrel sliced off a slugga. Also gave him a chain whip from some leftover cutoffs and plasticard goggles (they do nothing). 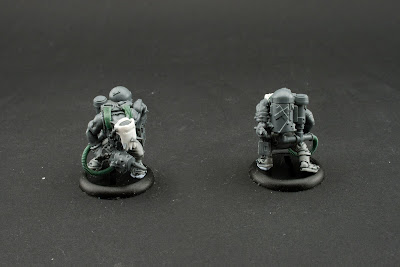 Idea for the third spanner was based around the fuel tanks from the aforementioned burna. Trimmed them a bit to sit flush on his back and greenstuffed the missing straps. The torch was made out of a slugga arm and a burna nozzle, along with a greenstuff hose. The head is a regular one from the boyz kit, but since I've used it already and wanted every single one of the footsloggers to have a unique head, I spruced it up with a plasticard welding mask. Just a piece of tube carved up and some spikes shaved off previously ruined choppas. 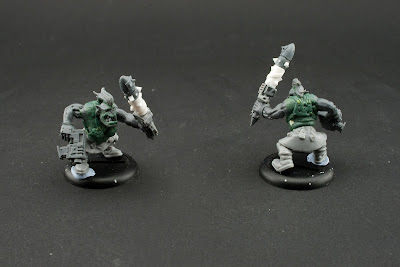 Now this one is mildly controversial, due to being a female ork. The commissioner asked me if I could make one, and since I fancied a challenge, I decided to see if I could make an ork look at least somewhat female. I used an ork head and tried to round it out and smooth out the features a bit and added a lick of hair. The torso is sculpted entirely from scratch. Started as lumps of leftover Miliput I kept collecting into a rough shape of a torso, which I then greenstuffed over. Had the fantasy ork legs laying around and it would be a waste not to use them on this model. Also made a motorised rolling pin, using the chain choppa arm, tip of a rokkit and some tube. I guess that's as female as an ork can get. Kinda curious to see how well the torso will look when painted. 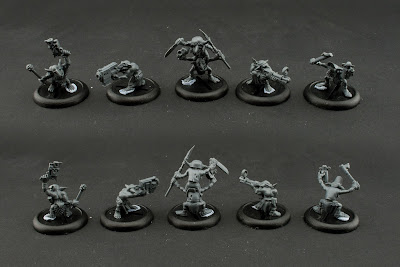 And finally, the grots. A pretty simple job here, some time ago I got a handful of WFB gnoblars from a trade with a friend and decided to use some of them here. They are a mix of grot and gnoblar bodies and heads and some miscellaneous bits I had laying around, including some small ork pouches. 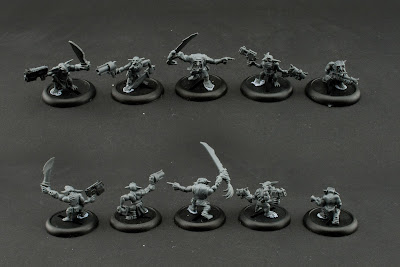 I also went for a few weapon swaps to vary things up, including some ork sluggas, one of the small pocket choppas from the boyz kit and the grot heads from the stormboyz and bikerz kit. Overall really happy with the variety.

So, that's it for now. Check back soon for pics of the entire completed commissions and possibly the video as well. That is if my editing software will comply. So far it's acting up when importing the video files already. Anyway, thanks for reading and see you soon!

Here will be information about this spot of the interwarpz.